This is the first blog in an occasional series that lists our travel wish list.

I would love to visit the Snow Monkeys of Japan.  My mini travel obsession began at least a decade ago. I watched the most beautiful nature documentary I have ever seen.  The documentary focused on the macaques who ease their tired, cold bones by bathing in hot springs.  It was a dreamy, wonderful hour of fabulousness and has stayed in my memory every since. 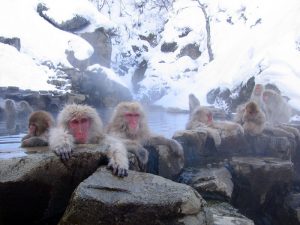 The official name of where they live is Jigokudani Yaenkoen in Japan.  It is commonly known as Snow Monkey Park.  It forms part of the Joshinetsu Kogen National Park, located in the valley of the Yokoyu River in the northern part of the Nagano prefecture of Japan.

The monkey park was established in 1964.  Local people noticed that groups of macaques were coming close to the hot springs and bathing in them to keep warm.  They developed the opening holes for the monkeys and the monkeys made their home in the local area.  Currently there are between 150 and 200 monkeys living in the area and using the hot springs. 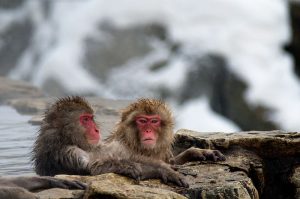 Snow monkeys in the hot springs

The monkeys live there all year but probably the most magical time to visit is the winter when the area is covered in snow and the monkeys need to use the springs more due to the coldness of the weather.  The main reason the monkeys live close to the hot springs all year is that the snow park employees feed the monkeys.  They feed them three times a day so you could be lucky enough to be able to see a feeding time.  The group are fed in hierarchy … the dominant male first, followed by his family and then the remainder of the group.

Why not add this to the travel ‘bucket list’. How could you resist those cute bathing monkeys? 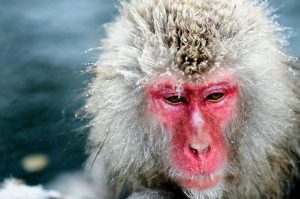